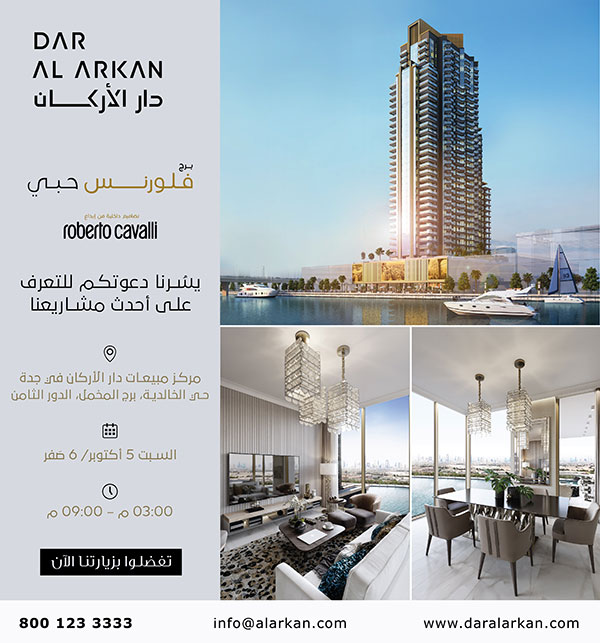 Dar Al Arkan Real Estate Development Company, launched its new project, Parisiana South, on the sidelines of participating and sponsoring Riyadh Real Estate, Housing and Urban Development Exhibition (Restatex) 2017, which was opened by HE Ministry of Housing Mr. Majid Al-Huqail last Sunday. During the opening ceremony, Dar Al Arkan received the award of the “largest residential project in 2016” for Shams ArRiyadh project. The company launched its new project, Praisiana South, through the biggest pavilion in the exhibition (680 square meters) during the period 23–26 April 2017 in Riyadh International Conference and Convention Center.

The new project, Parisiana South, is located in one of the most vibrant areas in Riyadh near King Fahd Road, and close to the Kingdom's largest cultural, sports and leisure city (Al-Giddiah). Such location will make Parisiana South an ideal place to housing employees of this giant project. The project is inspired by the Parisian style of living, which features open spaces, children playgrounds, walking and jogging paths, water fountains, green spaces and unique architectural style.

"The Saudi real estate market is competitive and promising, especially in the housing sector, which is witnessing a significant and growing demand. The Ministry of Housing has approached the private sector to partner towards meeting such demands," commented Mr. Yousef bin Abdullah Al-Shelash, Chairman of Dar Al Arkan, on the project launching. "While motivating the developers with a package of incentives and regulating the real estate market through a set of regulations that ensure the sustainability of development and mortgage financing, the Ministry provided the necessary finance for buyers through the programs with banks, including the subsidized financing program,” added Mr. Al Shelash.

Al Shelash confirmed that today Dar Al Arkan is considered the largest listed real estate company on the Saudi stock market with a capital of 10.8 billion Saudi riyals and a total asset value of 24.485 billion Saudi riyals. The company has proven track record of developing residential projects and integrated large-scale urban communities, which made it an essential partner in addressing the housing issue efficiently. The company has a lot of potentials and rich expertise in the field of housing development and financing through all financing alternatives whether local or external sources.

"Dar Al Arkan has been able to attract funding with billions of dollars from the global markets in the last ten years, thanks to the confidence of international markets, such as London, Singapore, New York, and Hong Kong, in the Saudi real estate market and their belief in the capabilities of Dar Al Arkan. Such funds helped Dar Al Arkan finance its projects which have been sold and those existing, and repaid a large part of such funds on a timely manner. Because of the Sukuk program launched in 2007, Dar Al Arkan enjoys today a global presence and access to the international capital markets, as well as the trust of the financiers, which allows for other financing opportunities from inside and outside the Kingdom”, added Mr. Al-Shelash.

Al-Shelash said that: "Mentioning the name of Dar Al Arkan in the National Transformation Program 2020 as a potential partner for the initiatives and projects of the Ministry of Housing was not coincidental. The company is regularly updated on the new trends in the economic transformation according to the vision of 2030 and the strategic and operational programs of the Ministry of Housing. Dar Al Arkan is already discussing with the Ministry of Housing how to build partnerships and cooperate in realizing the vision’s targets and support the housing strategy in a way that helps to address the housing problem in particular and to help the GDP in general”. He stressed that by sponsoring and participating in all real estate events and activities, Dar Al Arkan is approaching leaders, investors, financiers and thinkers inside and outside the country, in addition to the residential product customers.

It is worth mentioning that the units of Parisiana South project are ready to be delivered and invested in immediately. The units are expected to attract high returns as they are close to all government agencies and service providers. Further, the residents of Parisiana South will enjoy the exclusive features Dar Al Arkan will provide them with. In addition to females gymnasium, another for men and the allocated area for a kindergarten, Parisiana South provides residents with a free shuttle bus service every 30 minutes to and from Al Qasr Mall. Developed by Dar Al Arkan, Al Qasr Mall is one of the largest malls in Riyadh and a major destination in the city with hundreds of shops holding the big trademarks that are distributed over the mall’s four floors.

Dar Al Arkan is also showcasing some of its other real estate development projects in Riyadh, Jeddah and Eastern Province during the Riyadh Real Estate Exhibition.